The Way of St Hild: a new pilgrim route 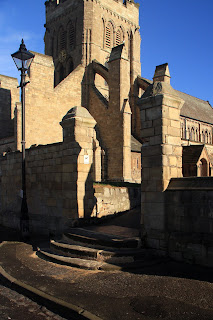 When we think about The Way of Saint Hild our first thoughts are naturally about Hild herself, the life and times of this great Saxon woman, and how the themes of her life might speak to us today. And I shall come on to her shortly. But before we do, I want to look briefly at the other important word in this project title, Way.

The idea of pilgrimage trails is ancient. For centuries people have criss-crossed Europe to undertake pilgrimages to the great Christian shrines of Jerusalem, Rome and Santiago da Compostela where I was two months ago. Here in England among prominent pilgrim destinations have been, and still are, Canterbury, Walsingham and Glastonbury. And in the North East, Lindisfarne, Hexham, Jarrow, Wearmouth and Durham where I was privileged to spend thirteen years of my life as, you might say, a guardian of St Cuthbert’s shrine.

Among those honoured places here in the North East are, or ought to be, South Shields, Whitby and Hartlepool, the three sites most closely associated with St Hild, and through her, the Saxon saints of the seventh century. The Way of St Hild will link the two southern sites associated with her, a pilgrim path along the North Sea that connects St Hilda’s Church on Hartlepool’s Headland to the Abbey on the cliffs above Whitby.

What is a pilgrimage for? Why would anyone want to walk the path we are creating? Why do people already walk the St Cuthbert’s Way from Melrose to Holy Island, and the St Oswald’s Way from Holy Island to Heavenfield? This seems to me to be a fundamental question to ask if we are going to make sense of this project.


A pilgrimage is a journey with a purpose. Traditionally, that meant a religious purpose, making an often long and arduous journey to visit a place associated with some key event in the story of faith, or with the lives of holy men and women who are revered in that story. The tradition speaks about holy places, sites that have been touched and lit up in some way because of those associations. “Hild was here.” And insofar as the whole journey is inspired by this sense of holy purpose, we can say that it comes to define a sacred geography, a landscape imbued with historical, cultural and spiritual meanings.
So pilgrimage declares: this is not just any landscape, however historic, however beautiful. The pilgrim way contributes to what we can call place-making. Its very existence enhances our understanding of our native geography, its genius loci or “spirit of the place” that makes it what it is, or as we tend to say nowadays, its sense of place. The journey may already be familiar or be travelled for the first time. The important thing is that pilgrimage lends it added significance. It suggests new ways of looking at it because of the stories it commemorates. There are new interpretations, new meanings, new textures.
Historically, pilgrimage has been defined in terms of journeys with a religious purpose, but I need to broaden that understanding. A journey can have many kinds of purpose that are not always overtly religious. Veterans travel to honour war graves where their comrades lie buried. Holidaymakers visit distant places they haven’t been to before to learn about their culture and art, meet their peoples and admire their landscapes. People go back to their birthplace or where their ancestors have lived. These are all pilgrimages in their different ways. A holiday is literally a holy day. That makes the point.
The Way of St Hild is offered as a journey that carries multiple significance. We can see this clearly from the twelve proposed stations for the “augmented reality” interpretations. It begins and ends with churches associated with St Hild herself, a traditional way of setting out and completing a pilgrimage at a sacred site. Some set our saint in the context of the Saxon era and explore how her story was told and her pilgrimage developed into the later middle ages and beyond. Another identifies her as one of a North East cluster of holy men and women who were honoured by pilgrimages. But some stations are more historical. They make us aware of the Anglo-Saxon culture in which Hild lived and that the pilgrimage landscape has a prehistory going back to Roman times. One of them opens up an aspect of the natural world, the wildlife of the Tees Estuary and helps us understand the landscapes that Hild knew and that formed her as a northern saint. Not all of these are directly focused on Hild herself, but all of them contribute to the rich texture of this pilgrim journey and place her story in a larger context than simply her own life and times.
One of the important aspects of any pilgrimage is that while it often commemorates people or events in the past, at its best it is never backward-looking. That is to say, good pilgrimage makes a distinction between the past in itself, the past as it’s featured in the stories told about it by subsequent generations, and the past as we ourselves encounter and experience it as people of today. Theologians talk about anamnesis, bringing the past into the present so that it has the potential to shed light upon our contemporary concerns and even contribute to shaping the future. This is what is happening when Christians celebrate the eucharist and take bread and wine “in remembrance of me”, not to relive the past memory but to actualise it in the present, make it a real agency of transformation.
This seems to me to be crucial in the way we set about the project of imagining this particular Hild-inspired journey and creating it as an offer to enrich people’s lives. How do we avoid setting up an exercise that is no more than an exercise in recreating the past? By taking an intentionally holistic view of what we are engaged in, not least in its connections with our contemporary world. This means broadening the scope as far as we can while preserving the integrity of the controlling theme of St Hild. I shall come back to this later on.
I began by defining pilgrimage as journey with a purpose. Ultimately, I guess that purpose means our own self-understanding as contemporary men and women. A way is more than a physical path. It suggests our way of life, a spirituality of being human, the journey we cannot help making if we are serious about human life and being good citizens of our age. We want in our best moments to know our place in the world and how we can leave a legacy that will have added value and enhanced not only our own lives but those of our successors.

-the natural maritime heritage of this stretch of the North Sea coast (recalling how the Saxon saints lived close to nature), together with threats to the environment, species diversity and natural habitats;
-industry on the coast including mining, shipping and fishing;
-Hartlepool’s role as a gateway to safety for those given sanctuary at Durham Cathedral and embarking on exile
-sea and land communications along the coast (in the middle ages, the sea was the highway of choice that connected nations and societies);
-poverty, need and social justice in the North East (of which the Saxon saints were champions);
-war and conflict from the Viking invasions, military fortifications along the coast, and the air raids of the Great War;
-education and learning (promoted in Hild’s convents as a key aim of monasticism);
-the arts in the North East from Caedmon, Hild’s poet, to the present;
-sport, leisure and recreation as they respond to the opportunity of “sabbatical time” whether chosen or enforced by unemployment, age, sickness or disability.
This can sound contrived, I know. And pilgrims would see straight through any bogus attempt to make connections. But I could make a plausible case for a Hild pilgrimage broadening its reach in all these ways. And that includes connecting it with other pilgrim “ways” that already exist or are being developed in the North East. They could link us to Holy Island, St Oswald and St Aidan, Durham and St Cuthbert, Hexham and St Wilfrid, and Wearmouth-Jarrow and St Benedict Biscop and Bede. Once the controlling idea was worked out, so much else could flow from it. Natural heritage, our Christian past, the lived experience of the people whose “places” the route passes through, the larger dilemmas of contemporary North East England, all have a part to play in contributing to the wholeness of pilgrimage in these parts, its capacity to raise questions and make connections across the entire breadth of human life as it is experienced in this region of England.
The “pastness of the past” is part of its gift to us. By resisting nostalgia, but instead receiving and understanding it for what it is and what it has become helps us become genuinely contemporary citizens of the present who are able to contribute to today’s world with renewed insight, imagination and vitality. The Way of St Hild has an enormous amount to contribute to our common life here in the North East. “Augmented reality” could be another word for pilgrimage, in whatever ways we experience it. It’s very good to have a small part to play in realising this imaginative project.
At a seminar to discuss the development of a pilgrim trail "The Way of St Hild"
Hartlepool, 2 July 2019