A Path by Land and Sea: the Way of St Hild 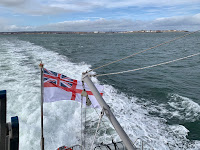 This is a remarkable gathering in a remarkable place on a remarkable day. And all because of a remarkable woman. It’s St Hild we have to thank for inspiring this celebration that begins here at Hartlepool and ends at Whitby this afternoon. Two places that cherish the memory of this great Saxon woman, and now a pilgrim path along the North Sea coast to link them, the Way of St Hild.

You might think it’s a little eccentric to look back across more than thirteen hundred years to find inspiration for this project. But the North is fiercely proud of its saints: Aidan, Oswald, Benedict Biscop, Wilfred, Chad, Cuthbert, and Bede whose writing lovingly tell their stories and help us imagine the world they lived in. Hild was one of these men and women of Northumbria’s Golden Age who shaped the culture and spirituality of the North East, to whom we owe so much of the North East’s identity and character and its marvellous ‘sense of place’. To Northerners, these legendary saints aren’t locked into some remote and distant past. They are our contemporaries, our fellow-travellers, our friends.

St Hild would have known intimately the route that bears her name. As Abbess first of Hartlepool and then of Whitby, she must often have made the journey between them, whether walking or riding the marshlands and the high cliffs, or viewing them from afar as she plied the highway of the great grey ocean. What’s more, her family links to the Northumbrian royal house at Bamburgh and to the mother house on Lindisfarne would have taken her to the northern reaches of the kingdom too, past South Shields where there is another church dedicated to her and where she may have founded her first convent.

‘All who knew Hild the handmaiden of Christ called her mother because of her outstanding devotion and grace’ says Bede. He writes about her as ‘a jewel in the land’, a shining light as a Christian leader, teacher, reconciler and healer. Her name means battle and she did indeed live through turbulent times. A Synod at Whitby in 664 at which King Oswiu presided called for leadership skills of the highest order when church and state were bitterly divided. She died full of years in 680. On her deathbed she urged her brothers and sisters ‘to preserve the gospel peace among themselves and towards others’, to live out the virtues of service to others as she herself had done throughout her life.

Our new Way of St Hild sets out to tell her story and celebrate her legacy. It does this not only by referring back to the events of her life, but by setting her in the context of her times, of the natural landscapes her path traverses, and of the events that subsequently changed the world she knew, sometimes, we can safely say, beyond anything she could have imagined in her lifetime. The natural environment of salt marsh and estuary and cliff top, the profusion of birdlife and wildlife, the fossil memories from aeons past she would recognise today. The sound of the salt sea crashing against the old eternal rocks would always have been music to her ears, for it was this that she taught Caedmon the cowherd to sing about as he found his voice to praise the Creator.

But what would she have made of the heavy industry of Teesmouth, the comings and goings of rigs and tankers, the steel, iron and alum works on the edge of the moors, feats of heavy
engineering like the Middlesbrough Transporter Bridge, or facilities along the coast dedicated to tourism, sport and leisure? One of the fascinations of creating this route has been the extraordinary contrasts you encounter on the Way of St Hild. And inviting reflection on what it could all mean to men and women of our twenty-first century. So this pilgrim path is as much a celebration of human activity and achievement – with all its dilemmas and compromises - as it is of the beauties of the natural world and the life and times of one of our greatest saints.

It’s a remarkable collaboration between Hartlepool Council and neighbouring local authorities, the churches, tourism agencies, the Royal Navy, and people and organisations that care for and interpret our natural and built heritage. Hild would have liked that spirit of common purpose. And given her adventurous spirit, she’d have liked, I think, the digital access to the pilgrimage that’s been created through augmented reality stations, so that people with limited or no mobility can still be pilgrims and walk the route on their smartphone.

It’s appropriate to be doing this in 2020 as our contribution to this ‘Year of Pilgrimage’ that’s being observed by cathedrals and pilgrimage sites across the land. Durham Cathedral is the focal point of a cluster of new pilgrim routes being launched this year, one of which connects with the Way of St Hild here on the Headland at Hartlepool. The capacity of saints and holy places to inspire pilgrimage is evidence of the interest being awakened today in what’s being called ‘religious tourism’. Stories like Hild’s are Christian in origin. Yet like the pilgrim routes to Compostela, Jerusalem and Canterbury, interest in pilgrimage is alive in people of many faiths and of no faith in particular for whom the spiritual search is a fundamental aspect of being alive. I don’t hesitate to claim that Hild’s faith prized inclusion as a basic Christian value. That’s the spirit in which we have tried to create this pilgrimage.

Which brings me to my final point. The more I study Bede’s writings about St Hild and her legacy as a Christian leader, the more remarkable I find it that a woman should have been entrusted with the authority conferred on her as a medieval abbess by bishops and kings. Saxon monasteries were not primarily places of retreat but centres from which the land was Christianised and ruled, and affairs of state were managed. Politics and religion were inextricably intertwined in places like Hartlepool and Whitby. The woman whose memory is enshrined in our pilgrim path belonged to the front rank of leaders in the Saxon world. No wonder Bishop Aidan ‘loved her heartily for her innate wisdom and her devotion to the service of God’.

So you’ll not be surprised that there was a fond wish to launch The Way of St Hild on International Women’s Day 2020, Sunday 8 March. This year’s theme is Generation Equality, meaning the empowerment of women and girls not only for good citizenship but also for leadership in the worlds of today and tomorrow. Like Ruth in our first reading, Hild speaks to us across the centuries of all that represents the best and noblest in human character, giftedness and service. She is a woman for us all to be proud of, and whether as women or men, to emulate as we ask ourselves what it might mean to serve God and our neighbour in whatever capacity he calls us to at just such a time as this? 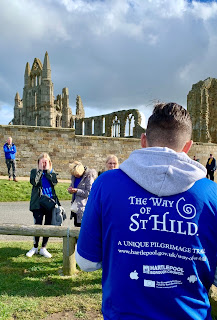