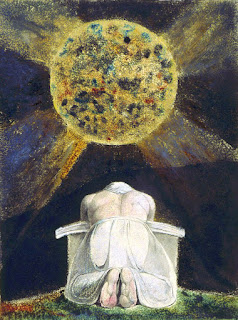 ‘What if this present were the world’s last night?’  The seventeenth century metaphysical poet John Donne puts that question in one of his Divine Poems.  He was much exercised by thoughts about the end of the world and about death, the end of his world.  ‘This is my play’s last scene, here heavens appoint / My pilgrimage’s last mile’;  ‘Oh my black soul!  Now thou art summoned / By sickness, death’s herald, and champion’; ‘Repair me now, for now mine end doth haste, / I run to death, and death meets me as fast, / And all my pleasures are like yesterday’.  And with death come thoughts of darkness, for his was a troubled soul.  ‘To see God only, I go out of sight: / And to ’scape stormy days I choose An everlasting night’.

For Donne, the Winter Solstice held powerful significance: the shortest day, the ‘year’s midnight’ as he calls it.  This precarious axis of the seasons when the sun’s light almost fails is for him a metaphor of his spiritual condition: wondering, hoping but not always expecting that the light will grow strong again, half believing that it might not.  Midwinter raises anxiety about the last things: solstitium: the sun stands still in the sky, the light burns low, and life is short, and nature holds out no promise that she will ever renew herself or that this pale sun whose rays barely penetrate to earth could ever warm another living thing.

For most of us, the Solstice (at 4.19 am on the morning of Sunday 22 December) will pass unnoticed.  We are insulated from it not just by electric light and central heating and the ceaseless flow of online activity, but by the business that occupies us in the days before Christmas.  But those whose lives are tuned to the rhythms of the seasons and the rise and fall of light pay attention: Pennine farmers, market gardeners, seafarers, meteorologists, astronomers, poets.  For billions in our world, less burdened by technology than we are, these primal rhythms are close to what it means to sustain life, hold out the prospect of a tomorrow as well as a today.  ‘What if this present were the world’s last night?’ is not the private fantasy of a morbid soul.  It is the question to ask when the planet is spinning relentlessly towards an irreversible climate catastrophe.  The first victims to suffer will be the poor and voiceless of the developing world.  The world’s last night is no longer the fantasy of a fevered imagination.  The apocalypse is now.

In these days before Christmas, you may wish I’d lighten up (an apt image for the solstice if you think about it).  But while modern Anglican texts soften as Christmas approaches, the Book of Common Prayer maintains a tougher Advent focus.  Sunday’s collect is one of the most majestic in the book: ‘O Lord, raise up thy power and come among us, and with great might succour us’: we call on God as those who are helpless because he alone can rescue us.  In the Prayer Book communion rite, both the third and fourth Sundays of Advent give us gospel readings about John the Baptist, hardly comfortable reading for Advent.  The Great O antiphons of Advent are a crying for the light at this dark time of the year: ‘O Morning Star, splendour of light eternal and sun of righteousness: come and enlighten those who dwell in darkness and the shadow of death’.  And when Advent at last utters the name ‘God with us’ in the antiphon of the final day before Christmas Eve, it is longing and desire that run through it: ‘O Emmanuel, our King and our Lawgiver, the hope of the nations and their Saviour: come and save us O Lord our God’.  Come…. Come….It is futures that we fasten on in Advent: futures promised, futures glimpsed, and yes, futures feared as well.

At the Solstice, people used to kindle fires to keep light and warmth alive and cherish them for the long year ahead.  Perhaps it is the distant origin of fairy lights and Christmas trees; perhaps we still need to echo our forebears and in ceremony and symbol act out the issues of light and dark. In many cathedrals and churches, the traditional Advent procession moves up the church from west to east: a movement towards the light, at first experienced partially, brokenly, as if it might be swallowed up again by the immense darkness in which we stand and wonder and wait.  Gradually that fragile light is established; it grows until it reaches its full strength, luminous, radiant like the heavenly Jerusalem, the city that ‘has no need of sun or moon to shine on it, for the glory of God is its light, and its lamp is the Lamb.’ ‘Eternity’s sunrise’ to quote Blake’s famous phrase.

Yet the hope remains future.  We don’t yet possess it.  We still pray ‘Maranatha, Come Lord Jesus!’, for the kingdom is not yet present and God’s purposed not yet fulfilled.  We ask every day in Advent that we may ‘cast away the works of darkness’ and that God may put upon us ‘the armour of light now in the time of this mortal life’.  We glimpsed the light of God’s presence in that great climax of the Advent Procession, but then it was taken from us again: for it was but a glimpse of glory given for a while.  It had to subside, for at the end we have to go outside again into the night, like the winter sparrow in Bede’s parable who flies into the warm lit hall only to fly out again into the cold and dark.

It’s in that half-light of daily existence that the prayer, ‘Come thou long-expected Jesus’ becomes most real. It breathes desire, expectancy, hope.  We know we can face the night, for this vision will sustain us, Sol Invictus, the Unconquered Sun who is the glory of the nations.  We know that though we walk in darkness we have seen a great light and need not be afraid.  In midwinter the darkness envelops us again, fraught with ambiguity. The bright clear long light of summer is but a memory.  For now. But darkness is not necessarily ominous and bad.  In the Bible clouds and darkness are where you find the presence of God. ‘There is in God a deep and dazzling darkness’ says the poet, drawing on a long Christian mystical tradition.  ‘Churches are best for prayer, that have least light’ says Donne.

It was on Christmas Day in Durham Cathedral ten years ago that the ‘new creation’ high altar frontal was unveiled.  It shows the rising sun, its golden rays penetrating to and animating the extremities of creation.  It rises out of a blue sea, as if to remind us of Advent and waiting for the God’s purposes to be fulfilled.  For even the birth of Jesus is not the end but the beginning of our world’s redemption, the dawning of the light.  The sun has yet to rise completely and fill the sky.  Across the frontal is a thin red arc, almost invisible until you come close to it, the thread of pain and passion stitched across glory which is the cost of it, the destiny of the Holy Child.  On Solstice day, which this year falls on the first day of the week that we call Sun-Day, we celebrate the light that is coming among us while at the same time we hold in our hearts those who in the dark places of pain and passion wait each day for deliverance.


‘What if this present were the world’s last night?’  Only when we ask John Donne’s question for our world and for ourselves can we begin to hope.  It is a clarifying question, for it tells us that there is work to do and darkness to dispel and lives to change.   There are four days of Advent left to us.  We must make the most of them, especially as after Sunday the days will start getting longer again, and the light become stronger; for ‘the night is far spent and the day is at hand’, the day of Christ whose glory fills the skies.
Posted by Aquilonius at 17:14