In Praise of Etheldreda 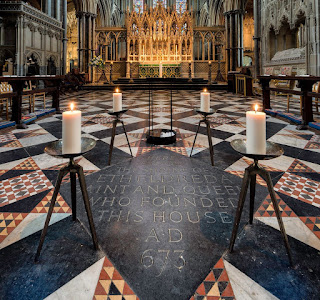 I’m very glad to be here in Ely to celebrate the Translation of St Etheldreda. I come to you from Tynedale in Northumberland, the lands where Etheldreda was once queen. As does your new Bishop of Huntingdon who is installed as a canon of this Cathedral today. She, indeed, follows literally in the footsteps of your saint, since it was Queen Etheldreda who granted estate to Wilfrid to build his legendary church at Hexham where Dagmar was rector. We celebrated Wilfrid’s feast day just a few days ago. It was he who prevailed on the Northumbrian King Ecgfrith to release his Queen from her marriage vows and take the veil. He got into a lot of trouble for it, and was exiled from his see for a while. Meanwhile, she founded her monastery here at Ely in her native East Anglia. So Ely owes its existence to a northern saint, which makes it an honorary member of the great Northumbrian family of Saxon religious foundations. I am sure this is something Dagmar will remind you of from time to time.

Etheldreda is Aethelthryth, “noble strength”, a lovely way of describing her. She has a beautiful window in Hexham Abbey that commemorates her benefaction, but she was of course always your saint rather than ours, being the daughter of an East Anglian king who only found her way up to Northumbria because its young king Ecgfrith needed a royal bride to give him offspring. Famously, she insisted on remaining a virgin. She had always believed herself called to the religious life. So she came home to the Fens and founded a double monastery for men and women here on the Isle of Ely along the lines of Hild’s communities at Hartlepool and Whitby. Bede tells us that she presided over her community in a spirit of humility, piety and devotion, living an intensely austere life until she died in 679. Proclaimed a saint, her relics were translated to the shrine of her abbey church in 695, the event we commemorate today.

Wilfrid was present at this great ceremony, the man who had witnessed to her virginity, consecrated her as a nun and watched the elevation of her untarnished remains. Bede wrote a hymn in honour of her as “an example of heavenly life and teaching”. He might have had our reading in mind, for the church’s memory of her was of a woman free of “malice, guile, insincerity, envy and slander”, no mean achievement in the febrile world of the Saxon kingdoms and their politics. Indeed, in the imagery of the letter of Peter where Christ is the cornerstone of the new temple of God’s people, he sees the household of faith as built upon precisely the Christian values and virtues that Aethelthryth herself embraced. Her memory, etched into this shrine, bears witness to vision of God’s kingdom on which her life was premised and from which she never allowed her gaze to wander as queen, wife and abbess.

It’s just four years since we left Durham. People sometimes ask me not only what I miss from our thirteen wonderful years there, but what I learned from cathedral life. I could speak for England  in answer to both those questions. But as to the second, one big insight that gradually worked its way into my spiritual bloodstream I owe directly to St Cuthbert. I used to say to visitors that Durham is not a cathedral that holds the shrine of a saint, but a shrine around which a cathedral has been built. And the thing about putting it that way round is that it requires you to focus primarily on the person, not the building. I asked myself: what kind of saint was Cuthbert, that he should be so cherished and loved, not just in Durham but across the North? I used to kneel at the shrine and reflect on his holiness, his simplicity, his single-heartedness as a man of God. This is what a dean should try to model, I thought, how the community ought to envision itself as God’s people holy and humble at heart. It stopped me being seduced by the majesty of the building, the power it embodied, “pride of man and earthly glory” as the hymn says. It told me that while tower and temple fall to dust, the spiritual principles on which they are built are the things that abide for ever, that are for eternity our temple and our tower. Cuthbert put me in my place.

I think there’s a similar truth here. The whole world loves Ely just as it loves Durham. Romanesque crowned by gothic, water to set off a world class building, a peerless vista from the railway station, a compact cathedral city huddled round its sacred space - what could be more enticing? Maybe what matters most is the spirituality that connects them, founded as they both are on a pre-Conquest story of faith that was embodied, made visible and tangible, in the lives of holy men and women, then lived out and borne witness to by religious communities during the Benedictine centuries, and finally by us who succeed them in our post-Reformation Anglican cathedrals. Saints like the lamps in the gospel giving light to the whole house – its they who impart so much of the character, the spiritual texture, of these great places.

So to lay a relic of St Etheldreda on her shrine during this service is not do anything bizarre or superstitious. It’s an act of gratitude to acknowledge our roots and treasure the memory of a holy woman but for whom we would not be here today. It helps us to touch directly a life of sanctity and devotion, of purity of heart and faith in the gospel, of undying hope in the coming of God’s kingdom of truth and peace. Hers was a life lit up by the light and love that she saw, and we see, in Jesus. There was nothing she would not do to serve that light and love. There is nothing we would not do. The shrines of the saints are our inspiration never to lose heart but to be faithful unto death, in the hope of receiving the crown of life.

What matters is that we allow the memory of the saints to shine a light on our own times, our experience as men and women of our century who are stirred by the words of Jesus, “You are the light of the world. Let your light shine before others, so that they may see your good works and give glory to your Father in heaven”. What would it mean for the dark places of our national life, our politics and our society to be lit up in that way? The dark places of our church? The dark places of our personal lives? Etheldreda who walked palace corridors and sat on an earthly throne, yet renounced them to embrace the poverty of the gospel and walk in the light of God: she is just the kind of saint we need to keep hope alive. The meaning of her name, “noble strength” with its connotations of stability, steadfastness, confidence in the gospel – these are the spiritual virtues we need to cherish and cultivate today. Which is why we give thanks for this Cathedral and its testimony to God’s mercy and wisdom and love. And for the memory of Etheldreda kept alive here in her holy place, and for her companionship and prayers as we trace her footsteps and journey on together full of hope towards that City set on God’s holy hill, the goal, the light and the joy of every pilgrim heart.