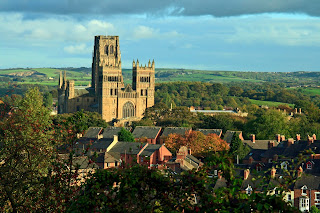 “Inspired by Durham Cathedral.” I first set eyes on it as a schoolboy from London one bleak November day in 1966. I got off the train at Durham and took in the spectacle of the Cathedral and Castle on their acropolis, one of the great views of Europe says Pevsner in The Buildings of England. I walked up to Palace Green to be interviewed with a view to reading maths at the University. I ended up at a university further south that’s a little older than this one. But the grey towers of Durham haunted me. I married into a North Eastern family and began to discover the region for myself. In time I became a parish priest in remote Northumberland. Later I went back as Dean of Durham and was installed on St Cuthbert’s Day 2003, more memorable to history as the day the Iraq War broke out.

It felt like a homecoming to be back in the North East. I’d loved Durham Cathedral all those years away, but I now had to get to know it from within, its personality, its textures, how it had been inhabited down the centuries, the community whose home this great shrine now was. And where God was in it all. I had to learn that it’s so much bigger than you are. It puts you in your place. It’s not only the sublime building that is the perfection of Romanesque form. Or the loveliest of landscapes it sits in, the wooded peninsula with the river curling round it. Or a history that stretches back to the Norman Conquest and before that, the saints and scholars of Saxon Northumbria.

And I had to learn about the darker aspects of its story. How many people died constructing it at a time when life was cheap? To the Saxons, this mighty building was not so much about the glory of God as of the conquering Normans who treated the North with great savagery. Centuries later, Scottish prisoner were left to die in it during the Civil War. When we are inspired by something, when we feel the breath of God in it, we must never rhapsodise uncritically. We must learn to discern him in the shadow as well as the light.

But inspiration is the theme tonight. Three strands emerge for me.

First, the spirituality of the Cathedral. By that, I mean more than its public liturgy and music, uplifting though they were. I’m thinking of the personality of the building itself, its spiritual character if you like. I became increasingly fascinated during the time I was dean by how profoundly satisfying it was to pray in the Cathedral. Architecture forms us. Every sacred space has its genius loci, the unique spirit of the place that moulds us who come inside for sanctuary where we can ponder life’s questions and struggles, look for solace or strength, seek God.

To me, Durham Cathedral feels so hospitable because of its sense of proportion. Everything seems right. The vaults are not so high as to diminish a human being, not so low as to crush us. The nave is wide enough to feel generous, intimate enough to enclose us and make us feel safe. A child said it “wraps itself around you”. Its changing light, its chiaroscuro, reflect changes and chances of human existence. The monks who built the Cathedral followed St Benedict’s Rule. For them the well-ordered life was everything, for God is a God of order. Durham is a disciplined kind of building that used to remind me that we must be architects of the good life, learn in the school of Christ how to reframe our lives to echo God’s own holy and beautiful order. This kind of spirituality inspires me.

Secondly, there is the history of how the Cathedral came to be. It began on the Holy Island of Lindisfarne off the Northumberland coast where in the seventh century King Oswald invited Aidan to found a community to Christianise his kingdom. When his successor Cuthbert died in 687, his relics were revered in a shrine on the island. Viking raids in the ninth century made the exposed coast unsafe, so the Saxon monks gathered up their most precious possessions, their saints’ relics and the Lindisfarne Gospel Book written in his honour, and travelled round the North looking for a permanent home. After more than a century they came to the hill called Dun Holm in 995 and settled there. A church was built round Cuthbert’s shrine, and then the great Norman cathedral we see today.

So Durham has a history of having once been a travelling cathedral. To the Benedictines, its pilgrimage from Lindisfarne to Durham recalled the desert journey of the Hebrews to their promised land carrying with them the bones of their ancestor Joseph, as we heard in Genesis. Faith takes us on journeys of exploration, living in the light of God our ultimate fulfilment and goal. Our second reading spoke about being strangers and pilgrims who look for another country. The saints of Durham lived out that insight. When I prayed at Cuthbert’s shrine behind the high altar, I knew I was not only in the presence of the humblest and gentlest and best of souls. I was in the company of one who lived and died and lives on in the memory as a fellow-traveller, a pilgrim like me. The history inspires me.

Lastly, there is the Cathedral’s sense of place. In a book I wrote, I describe Durham Cathedral as the “mystic heart of North East England” because of its role in shaping the culture and spirit of the region. Theologians talk about sacred geography, how landscapes are configured by holy places, temples, shrines and pilgrim routes. Every faith has its sacred landscapes. I once lived near Salisbury Plain whose Neolithic barrows and henges and processional ways spoke of a landscape profoundly shaped by ritual and religion. As for Christianity, maybe it’s only at England’s extremities, Cornwall and the North East, where you feel the spirit of ancient faith and its saints so close to the surface of the land, a spiritual rhizome in the soil of our country. The “pull” of Durham Cathedral across the North East is why I say that you can’t understand the region without going there.

But I’m inspired as much by the Cathedral’s more recent connections as these ancient ones. The North East was once the industrial power house of Britain with its mines and railways, its shipbuilding, steelmaking and heavy engineering. Coal was king in County Durham. From the start the Cathedral was closely associated with the mining communities that surrounded it. At the Big Meeting each July, the Miners’ Gala service is held in it, the best attended event of the year. The procession of banners and brass bands and the book of remembrance recording those killed in mining disasters stand for the Cathedral’s connection with the world of work and the struggles of many in some of the most deprived areas of England. These are among the people who love the Cathedral the most. This human context inspires me, the connections between faith and lived experience.

The burning of Notre Dame in Holy Week showed how cherished our cathedrals are. Perhaps a test of “inspiration” is how you feel when it’s at risk. These numinous places draw visitors of all faiths and backgrounds: people who are open, or who are sceptical, or who are just not sure where faith belongs in modern life. What I found moving at Durham was how many visitors were themselves inspired by crossing the threshold. To be guardian of one of these shrines, this “serious house on serious earth” as Philip Larkin says, to be under its tutelage and be shaped by it was a rare privilege. When we are touched by anything that enlarges our horizons, offers a vision of the better people we could become, opens up possibilities that could change our lives, we are right to say we are inspired. And right to be thankful too. As I am, recalling my Durham years tonight.