Revisiting the Great Tapestry: a lecture in Coventry Cathedral

I am very glad to be back in Coventry in this year when the Diocese celebrates its centenary, and with it, this Cathedral in its two incarnations. We came to Coventry in 1987, this building’s silver jubilee year. In eight years here, I learned most of what I know about liturgy and music which were my main brief as Precentor. But as I look back, I realise that what influenced me most was this building itself, and the community whose place it was and is. I don’t only mean in the sense of understanding what cathedral ministry means, and thereby setting the course of the rest of my working life as a dean in two other cathedrals. I mean the experience of being a worshipper here, a disciple, a praying human being for whom this place proved to be extraordinarily formative. 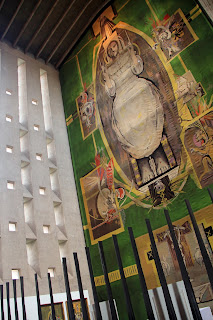 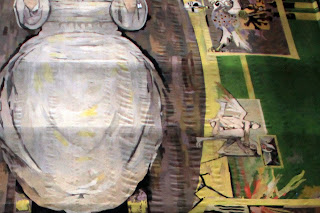 Let’s turn to the Tapestry itself for another example of this. Look at what is going on just outside the right-hand edge of the mandorla between St John’s eagle above and St Mark’s lion below. You can see St Michael the Archangel reaching down to a beaked creature who is facing away from Christ. This is Graham Sutherland’s depiction of Satan being thrown out of heaven, according to the twelfth chapter of the Book of Revelation. But as I pondered this image I was struck how different it is from the more famous depiction of the same event at the Cathedral’s entrance. There, Jacob Epstein’s great sculpture has the archangel treading down the adversary in a decisive act of triumph over evil. The Tapestry seems more ambiguous. Michael could as easily be reaching down to stop Satan from falling out of heaven as pushing him in a final coup de grace.
This ambivalence seemed to me to be important. Is the Tapestry saying that there is an eternal chasm between good and evil, and consequently a permanent banishment of the wicked to hell? Or is there is a constant work of redemption taking place in the cosmos that will one day lead to the healing of all that is now separated, distorted, fractured? In the earliest centuries of the Christian era, theologians like Origen said that as long as a soul remains in hell, Christ remains on the cross. At the time when Sutherland was designing the Tapestry, the writings of the Catholic priest Teilhard de Chardin were highly influential. Influenced by the universalism of Origen and by Darwinian evolutionary theory, he envisaged a divine work of convergence towards the unity of creation. He spoke of it as the “Omega Point”. It’s interesting to conjecture whether Teilhard’s theology was an influence on the design. As far as St Michael and the devil are concerned, Sutherland doesn’t say in his book on the Tapestry what he intended. And even if he had, that would not constrain our own reading of it. All artists and writers speak beyond what they think or intend. Sutherland only says that by including it, he wanted to acknowledge the dedication of the Cathedral to St Michael and at the same time create a degree of asymmetry that he believed the Tapestry needed.
I went outside many times to study the Jacob Epstein sculpture and how he depicts the victorious St Michael. It’s often been observed that his face, far from wearing the conventional demeanour of a victor, is remarkably quiescent, almost subdued. I think commentators are right to construe this as compassion; not that Michael hasn’t defeated evil, but that in defeat are the seeds of a new beginning, which explains why Satan is looking up at the victor who stands guard over him, not defiantly but entertaining the hope that redemption, even for him, is not an impossible idea. If this is right, then there is a coherence between the two St Michaels, outside and in, and that seems to me to fit precisely into the message of global, indeed cosmic, reconciliation that this Cathedral has always proclaimed to the world. Who’d have thought that a detail on the Tapestry could have such far-reaching theological consequences?
I think this insight was the key to unlocking my own reading of the Tapestry. When I first thought of writing about it, I imagined it would be a kind of descriptive essay. There’s still room for that project, understanding the Tapestry’s place in the design of the Cathedral, in art-history, as a landmark in textile creation, and as a theological statement in the tradition of Christian iconography. The splendid Sutherland exhibition you are enjoying in this Cathedral demonstrates the stature of a great artist whose reputation, I think, has been steadily growing since his lifetime. Ben Quash who has already lectured here could be the person to write it. But what I was finding as I pondered the Tapestry was that it was drawing me into it and inviting me to find my personal place within its rich, complex symbolism that about God, the universe and everything. Meanings were what I was interested in, not fixed, static codes that imperiously ordered me to understand it this way, but dynamic, fluid meanings that invited me to make a personal spiritual journey, become curious, explore, discover, discern.

So I tried to put myself inside the Tapestry and learn. Let’s consider the human figure standing between the feet of Jesus because, very thoughtfully, Sutherland has already placed someone, anyone, you, me, every child of humanity, on the Tapestry. I admit I was startled to re-read what I’d written about this. Having made the point that the figure is not, in fact, life-sized, though you often hear it said, I go on:
If I concentrate on what I see in that square of tapestry and for the time being forget about the rest, I see an eloquent picture of my existence. I stand alone in a dark place. Above me is a great swirl of – I know not what; it simply overwhelms the place where I am, like some huge, lowering storm cloud. On either side of me are feet and legs, rearing up to be lost in the darkness above. I am not to know whose they are. For all I know, they may as well be the wreckage of some colossal monument, like Shelley’s “two vast and trunkless legs of stone” with their chilling motto: “Look on my works, ye mighty, and despair!”
The word that comes to mind as I ponder the human being is lostness: lost in relation to the scale of his (sic) immense surroundings, lost in a deeper, more existential sense in the face of life’s dilemmas. In one way this man can look exceedingly forlorn. I come back to Dante in his dark wood: ready for his journey, yet not knowing in which direction to go. I see myself in that diminutive human figure at the times of my life when I have felt most perplexed, crushed almost by the demands, dilemmas and uncertainties of being alive and human. At such times it is as if I am stripped of all the normal securities with which I protect myself from too much reality. I am alone and naked in the dark, like the figure on the Tapestry. Like Job, I hear a voice summoning me to stand up, like a man, and be questioned. Who am I? Why am I here? Where am I going?
(That passage illustrates the stream-of-consciousness style in which I wrote. It may not be to everyone’s taste, but it illustrates the interest in psychotherapy that was awakening in me at the time my wife Jenny was beginning a psychoanalytic training. I believed that in the spirit of Now Voyager! the only book worth writing was an honest one in which I was not going to be afraid of the first-person singular.)
The chapter goes on to explore the hiddenness of God, the endlessly fascinating story in Genesis of Jacob wrestling with the angel, the via negativa in Christian spirituality exemplified by spiritual guides like Meister Eckhart, the anonymous fourteenth century book The Cloud of Unknowing and some of the poetry of R. S. Thomas. What does it mean to speak of the absence of God as a spiritual reality? How do we speak about God without resorting to analogies? How we find God in the dark places of life? It’s important you know that this comes near the end of the book. So it is set in the context of what we’ve come to learn about Christ in glory crucified and risen, about the grace and truth of God our Creator and Redeemer, about the four living creatures as symbols of the evangelists, the bringers of good news. And although I conceived this chapter as necessarily about the shadow side of life, it’s important that I also quote the ending.
The darkness that swallowed up Christ on the mountain of transfiguration still contains him and shines because of him. It becomes the shekinah, the cloud of glory. In the absence is a profound presence. And as I pierce through to that presence, I find out that its nature and its name is love.
The tapestry beautifully expresses this paradox. For the man’s darkness is none other than the shadow of the great Christ above him. The fearful cloud over his head is the very skirt of Christ. On each side are the feet of Christ, strong, trustworthy. The man may not know it, but he is “wholly within love”. I see myself in him now in a new way: erect, noble, dignified in this new status as child of God. He is as I know myself to be, “wholly within love”, held firm, profoundly safe… “So the darkness shall be the light and the stillness the dancing”…In this dark yet good place I can be still; and discover that I am dancing in the sunshine. 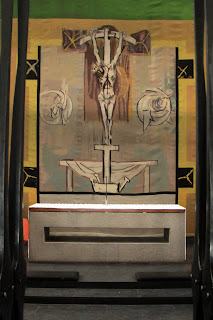 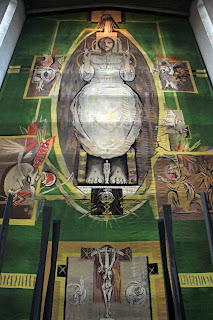 This is how I see the Tapestry. It tells me that Christ, majestic in his glory is not far from any of us – nearer to us than our own souls. He wants us to feel after him and find him, for he has given himself to us in undying love. The Tapestry is about Christ in Glory. But it’s also about us, as we are now, and as we hope one day to become. Augustine says of the eucharist that it is the mystery of ourselves that is upon the altar. It’s the mystery of ourselves that we see on the Tapestry, held and embraced within the mystery of God and his redemptive love. That’s the clue to reading it, I believe, not only as a beautiful work of art but as an icon of all that is central to our Christian faith and human life.
Michael Sadgrove
Coventry Cathedral, 7 July 2018