Holy Week in Hymns 2: "My song is love unknown" 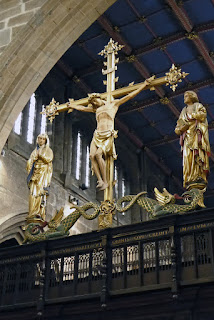 During Holy Week we are looking at some of the hymns we sing during Passiontide. Tonight’s is one of the best known, and also one of the best. “My Song is Love Unknown” is by the seventeenth century clergyman-poet Samuel Crossman. Just after the Civil War, he published a little book of nine hymns called The Young Man’s Meditation, or some few sacred poems. He was the Dean that never was. He was a Canon of Bristol Cathedral and was appointed Dean there but died that same year early in 1683 before he had taken up his office. He had been a Puritan and like two thousand other ministers, was thrown out of the Church of England under the Act of Uniformity in 1662. But he found his way back into the newly re-established church shortly afterwards.

Perhaps that bitter experience of being ejected, homeless and without friends coloured the way he thought about Jesus in his Passion. For this hymn, more than most others, tries to get inside the human experience of passion – not only our experience of Jesus but his experience of us as the One who “was despised and rejected of men, a man of sorrows and acquainted with grief”. To look at the Passion that way is to give us wholly new insights into what it must have meant to take this fore-ordained road to Golgotha and face death at the Place of the Skull.

Let us open up the hymn half way through where we find the emotional and spiritual heart of the entire hymn. “Why, what hath my Lord done? What makes this rage and spite? He made the lame to run, He gave the blind their sight.” Sweet injuries! the poet cries out in a bitter irony. Was it for these things that the Lord is strung up on a cross to be jeered at and spat upon by the crowd that only days before had shouted Hosanna? Why has he been treated with such contempt?

That question comes out of the Old Testament. In the prophecy of Micah (6.1ff), God summons his people to a court of law so that they and he can defend themselves against the charge of breaking faith with each other. The Lord begins his defence in this way: “O my people, what have I done to you? In what have I wearied you? Answer me!” And he carries on by reminding them of all the ways in which he has delivered Israel: “for I brought you up from the land of Egypt, and redeemed you from the house of slavery”. This dialogue is the origin of the Reproaches that are sung on Good Friday, the long, agonised plea from the crucified Jesus to the people who have put him there. “O my people, what have I done to you? How have I offended you?” Why, what hath my Lord done? wonders the poet plangently.

In the Reproaches, and even more in the hymn, this plea becomes not a forensic law court challenge and defence so much as a highly personal lament on the part of a friend who is deeply wronged. Of course, it is the Lord who is suffering this terrible ordeal, none other than the One who came from his blest throne, the Prince of Life for whom heaven was his home. But that exalted title of “Lord” becomes intensely intimate in this hymn. He is not the Lord but my Lord – no fewer than three times, and then a fourth, my dear Lord. It reminds me of Mary Magdalen in the garden on Easter morning. At first she tells the apostles, “they have taken the Lord out of the tomb, and we do not know where they have laid him”. But when she encounters the two angels in white, it’s become: “they have taken away my Lord” (John 20.2, 13). That personal pronoun that carries such an intensity of emotion is the key in this poem too. Never was love, dear King, Never was grief like thine.

We have to read these references to Christ’s lordship in the light of the other great word in this hymn, friend. Indeed, we need to read the entire hymn from within the experience of a deep and intimate and wonderful friendship. We can see this coming from the play on words of love right at the outset. Love unknown is the poet’s theme, unknown not because he has to guess at it but because it passes understanding. To quote another hymn beloved here in Wakefield for its author was your Bishop, “It is a thing most wonderful, almost too wonderful to be, That God’s own Son should come to earth And die to save a child like me”. To be sure, it is my Saviour’s love to me, Love to the loveless shown That they might lovely be. It is my Lord who takes frail flesh and dies, who came salvation to bestow.

But as Crossman begins to puzzle over why humanity would not embrace such a guest, why men made strange, and none the Longed-for Christ would know it dawns on him how different are the longings and hungers within him. The opposite of making strange is to welcome, embrace, befriend. So out it bursts, his realisation that he is talking not only about the Word incarnate but someone who is as close to him as his own soul: But O! my friend, my friend indeed, who at my need his life did spend. And having rehearsed the cruel story of the passion, the bitterness of pain, the agony of suffering, the loneliness of dying, how even in death there was no friendly tomb for him to rest in, the poet comes back to what it means, this human-and-divine friendship that means more to him than everything he counts precious.

This is my friend. Where does Crossman draw this language from? It has to be the Gospel of St John. In Holy Week, we remember how Jesus taught his disciples in the Upper Room and washed their feet before going out to die. The focus of these moving farewell discourses is love, divine and human: the love with which God has loved them in Jesus, the love with which they are to imitate it and live it out by loving one another. This, says Jesus, is the new commandment. And to clothe this commandment with the warmth and vitality of flesh and blood, he goes on to offer an image of love that is freely given and received. Not the love of parents for children, or of spouse for spouse, or even the devotion of loyal servants to those they serve. “No-one has greater love than this, to lay down one’s life for one’s friends. You are my friends if you do what I command you. I do not call you servants any longer, but I have called you friends” (John 15.12-15). We know that verse from a thousand war memorials. It is the highest tribute we could pay to the sacrifices of so many that we associate it to Jesus laying down his life, and speak of it in the language of friendship.

We don’t know much about Samuel Crossman. But I think we can speculate from his hymn that he knew what deep friendship means. Maybe his troubled years of exile as a deposed minister had shown him who his true friends really were. Perhaps there were only a very few who were prepared to stand by him in his public humiliation. Misfortune has a way of isolating people when there is a whiff of disgrace in the air. Who wants to be known as an associate of this crucified criminal? Who wants to risk contracting the taint that radiates from the man whom not only mortals but God himself abandons? “Then all the disciples forsook him and fled” says the passion narrative of Jesus. “My God, my God, why hast thou forsaken me?” So it’s all the more striking that this passion hymn is charged with such emotion, such a deeply-felt empathy for the cast-out victim. Here is “passion” in both senses: a story of suffering and pain, but also a story of one human being’s solidarity with and love for another.

“Were you there when they crucified the Lord?” asks the old spiritual. Where do our minds and imaginations place us in relation to the man on the cross this Holy Week? Our hymn answers: be close to him, stand alongside him, suffer with him, enter into his pain. That’s what sympathy and empathy mean: suffering with, suffering alongside, suffering in. Holy Week calls us to journey with the Son of Man, make his via crucis ours, this way of the cross that he has travelled and that all of us who are marked with the cross in our baptism are called to travel too.

But we need to ask, in what spirit do we make this pilgrimage each year? To speak about entering into the experience of the Crucified sounds onerous, too tragic for our twenty-first century that can only contemplate darkness in small doses. People tell me quite candidly that they switch off the television news when it turns shines a light on terrorism in our cities, or bloodshed in middle-eastern war-zones, or famine victims in Africa. It’s true, as T. S. Eliot said, that humankind “cannot bear very much reality”. So a Holy Week spiritual discipline might entail not flinching, holding our gaze a little longer, thinking about and praying for the crucifixions that happen daily in our world, and then discerning what part we might play in bringing light to dark places where in life there is no house, no home.

And there’s another thing about this way of the cross. The spirit that this great hymn breathes tells us as much as the words themselves do. Yes, they draw us into a story that is truly dreadful. How can a man's crucifixion not be a terrible thing? But that is not everything it is. For I find in the poem a prospect that is indeed terrible, but also sweet. It’s a sweetness that gives me back my life and hope precisely because of what the ordeals undergone by this Saviour, my Lord, this dear King who is my Friend indeed.

So it is not a matter of somehow feeling sorry for Jesus. No, pity is a more robust attitude than that, more theological, more spiritual, more humane. If you asked the poet what word summed up his hymn, I think he would reply, gratitude. Thankfulness for the love of his Friend. Thankfulness for the greater love that lays down his life. Thankfulness for reconciliation and redemption, renewal, forgiveness and the taste of glory. You could call it eucharistia, the great thankfulness that gives its name to what we do to remember him tonight in bread and wine.

This is my Friend, in whose sweet praise I all my days could gladly spend. And shall, please God, to the end of time.